At Pakefield Primary School we aim to help children to build up a clear, chronological understanding of Britain’s past and that of the wider world. Through high quality lessons, children will be inspired to want to discover more about the past and will be helped to make connections between their own lives and past human experiences. Skills of enquiry, analysis, interpretation and problem solving will be developed, promoting curiosity and deepening learning. Our History curriculum is designed to cover all of the skills, knowledge and understanding as set out in the National Curriculum

The National Curriculum for history aims to ensure that all pupils:

How do we teach History?

History at Pakefield Primary School is taught through an enquiry based approach, which encourages the children to become ‘Historical Detectives. Teachers use Connected History scheme of learning to inform and support their planning. It is taught as a half termly topic, focusing on the knowledge and skills as stated in the National Curriculum. We encourage first hand experiences through handling artefacts, visits to relevant sites of historical interest and in school workshops. There are opportunities for cross-curricular links where children can apply their knowledge and understanding. Learning will be supported through the use of knowledge organisers, which will enable the children to retain new facts and vocabulary.

Pupils develop an awareness of the past, using common words and phrases relating to the passing of time. They know where the people and events they study fit within a chronological framework and identify similarities and differences between ways of life in different periods. They use a wide vocabulary of everyday historical terms. They ask and answer questions, choosing and using parts of stories and other sources to show that they know and understand key features of events. They understand some of the ways in which we find out about the past and identify different ways in which it is represented.

Pupils are taught about:

Pupils continue to develop a chronologically secure knowledge and understanding of British, local and world history, establishing clear narratives within and across the periods they study. They note connections, contrasts and trends over time and develop the appropriate use of historical terms. They regularly address and sometimes devise historically valid questions about change, cause, similarity and difference, and significance. They construct informed responses that involve thoughtful selection and organisation of relevant historical information. They understand how our knowledge of the past is constructed from a range of sources.

Pupils are taught about:

Progression of Skills for History 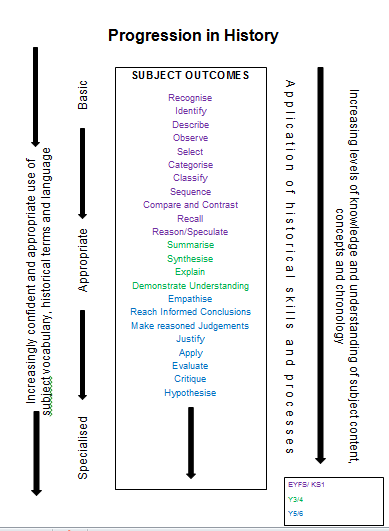 What do we want for our children?

By the time, children at Pakefield Primary leave our school they will have developed a secure knowledge and understanding of significant people and events from historical periods covered. They will have taken into consideration a range of historical evidence and will have the ability to make strong and critical use of it to support their explanations and judgements. They will have acquired a passion for history learning and will have developed their sense of curiosity about the past, and their understanding of how and why people interpret the past in different ways.

Please remember that we are a no nut school.